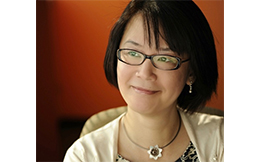 Recognizing that most businesses didn’t have the time or resources to leverage large volumes of publicly available business data, Emily Huang launched idaciti in 2014.

Before founding idaciti, Emily co-founded Rivet Software, which automated public companies’ financial filings using what was then a new data format—XBRL. She nurtured Rivet through explosive growth as the U.S. Securities and Exchange Commission mandated that public companies use XBRL filings to increase data transparency. Rivet was chosen as one of the fastest growing companies (INC 500) for both 2011 & 2012.

Emily has been issued five U.S. Software patents for XBRL data creation and consumption.She has been recognized nationally in the tech industry, and in 2011, Denver Business Journal awarded her its “Annual Outstanding Women in Business” accolade.
Emily holds Master’s degrees in Computer and Information Science, and Computer Assisted Instruction from the Cleveland State University and State University of New York at Buffalo.

Learn about how companies, investors and analysts are reaping significant benefits by using XBRL data to streamline analysis. We will present three actual uses cases where using XBRL data has allowed users to efficiently trace data back to the source, increasing transparency, improving the quality of research, and saving time and resources. We will also […]